Hillary Clinton has reached the number of delegates needed to clinch the Democratic U.S. presidential nomination, according to tallies on Monday by two U.S. media outlets, the day before six states were set to vote in nominating contests.

A former senator and U.S. secretary of state, Clinton would be the first woman to ever be the presidential candidate of a major political party in the country’s 239-year history.

But the campaign of her rival, Bernie Sanders, vowed to keep up the fight in what has been a protracted and increasingly antagonised primary race that has exposed deep rifts between the left-wing and the more centrist of the Democratic Party.

A Sanders campaign spokesman said it was wrong of the Associated Press and NBC News, which made the calls on Monday evening, to count the votes of superdelegates before they cast ballots at the Democratic National Convention in July.

“Our job from now until the convention is to convince those superdelegates that Bernie is by far the strongest candidate against Donald Trump,” Sanders’ spokesman Michael Briggs said in a statement, castigating what he called the media’s “rush to judgment.”

While most delegates are awarded by popular votes in state-by-state elections, superdelegates largely consist of party leaders and elected senators, members of Congress and governors, and can change their mind at any time.

For that reason, the Democratic National Committee has echoed the Sanders campaign, saying the superdelegates should not be counted until they vote at the convention in Philadelphia.

But that has not deterred the news media. The AP and NBC reported that Clinton reached the 2,383 delegates needed to become the presumptive Democratic nominee with a decisive weekend victory in Puerto Rico, a U.S. territory, and a burst of additional support from superdelegates.

Sanders, a U.S. senator from Vermont who calls himself a democratic socialist, has commanded huge crowds spilling out of parks and stadiums and has been particularly bolstered by younger voters angered by widening economic inequality with his promise of a “political revolution.”

But Clinton, who prefers smaller, round-table events, has continued to edge out Sanders, particularly among older voters with longer ties to the Democratic party. Her less lofty promises focus on improving the policies of her fellow Democrat and former boss, President Barack Obama.

“According to the news, we are on the brink of a historic, historic, unprecedented moment,” Clinton told a rally in Long Beach, California, shortly after the AP report.

“But we still have work to do, don’t we? We have six elections tomorrow and we’re going to fight hard for every single vote, especially right here in California.”

Clinton has 1,812 pledged delegates won in primaries and caucuses, and Sanders has 1,521. She also has the support of 571 superdelegates, according to an AP count, compared to 48 for Sanders.

Her campaign manager, Robby Mook, said the media call on Clinton was an “important milestone”.

“We look forward to Tuesday night, when Hillary Clinton will clinch not only a win in the popular vote, but also the majority of pledged delegates,” he said in a statement on Monday.

Sanders supporters have pointed to the uncertainty of whether or not Clinton or her aides will face criminal charges as a reason for him to remain in the race. Clinton’s decision to use an unauthorized private email server kept in her home for her work as secretary of state remains the subject of a criminal inquiry by the Federal Bureau of Investigation.

Earlier on Monday, Clinton called for party unity, suggesting it was time for Sanders, who only joined the Democratic party last year after years as an independent, to abandon his hard-fought challenge.

Montana, North Dakota, South Dakota and New Mexico also hold nominating contests on Tuesday, but most attention will focus on California, the country’s most populous state where another 475 pledged delegates are at stake.

Clinton once held a sizable lead there over Sanders, but opinion polls in recent days showed them in a dead heat.

A Sanders victory there could embolden his supporters to urge him to wage a fractious convention fight. It could also help Trump, 69, who clinched the Republican nomination last month, argue that she is a weak candidate.

“It’s going to make her ability to seal the deal with disaffected Democrats all that much harder,” said Jim Manley, a Democratic strategist who supports Clinton. “The only one benefiting from this is Donald Trump.”

Trump, the presumptive Republican nominee, has regularly stirred up controversy on the campaign trail. In recent days, his comments about a judge he believes to be biased against him because he is Mexican-American have drawn criticism.

On Monday, Trump, a New York real estate developer, insisted his concerns were valid. Clinton, in an MSNBC interview on Monday, said Trump’s comments about the judge were racist and bigoted.

The latest Reuters/Ipsos tracking poll showed Clinton with an 11-percentage-point edge over Trump, 46 percent to 35 percent, a marked change from just 10 days ago, when fewer than 4 points separated the two. 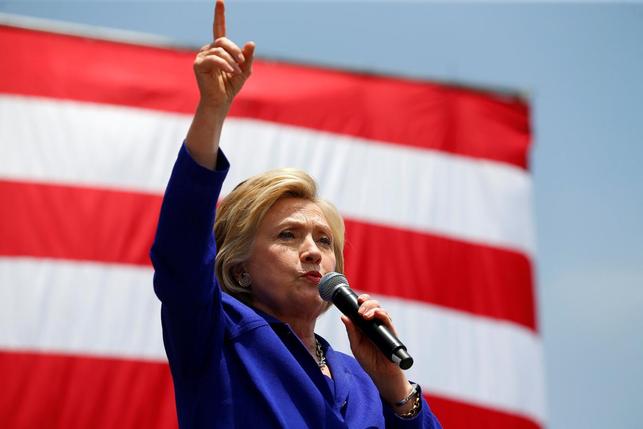