Forensic experts in Mexico have identified the body of a Ugandan Catholic priest among the remains found in a mass grave last month.

Father John Ssenyondo had been missing since being kidnapped in south-western Guerrero state six months ago.

The grave was located by federal police looking for 43 students who went missing in the area on 26 September.

The case of the missing trainee teachers caused outrage in Mexico and prompted a nationwide search.

DNA tests carried out earlier this month suggested that the bodies in the hidden grave near the town of Ocotitlan – where Father Ssenyondo’s remains were found- were not of the students.

Father Ssenyondo was abducted on 30 April by unknown gunmen, who blocked a road and forced him into their car.

He had been in the country for five years. His dental records were used to identify him.

“We don’t know the motive,” said Victor Aguilar, vicar in the diocese of Chilpancingo-Chilapa. “You know violence is widespread in the state.”

On Thursday, the parents of the 43 missing students began a bus tour across Mexico to publicise their call for investigations to be speeded up.

The protest tour began in Ayotzinapa, home to the teacher-training college where the missing group had studied.

The group had gone to the nearby town of Iguala on 26 September to take part in a protest against job discrimination. 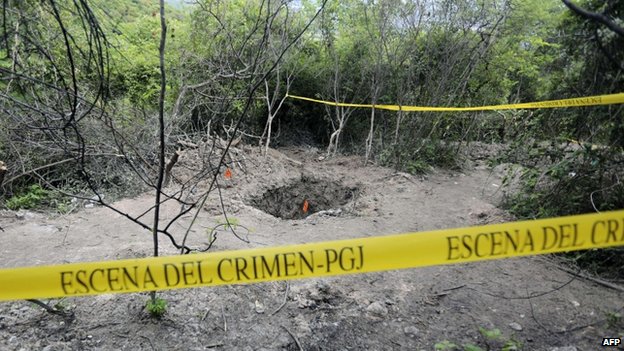 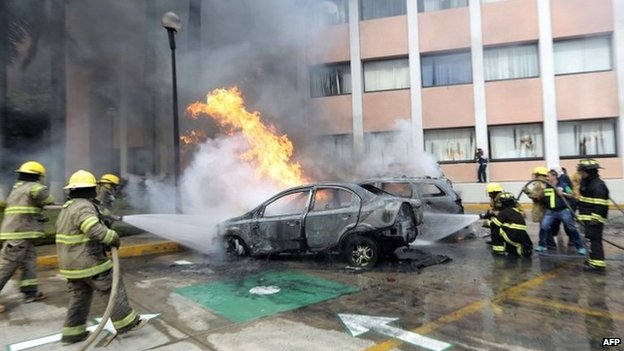 Protesters attacked the Guerrero state congress in Chilpancingo on Wednesday 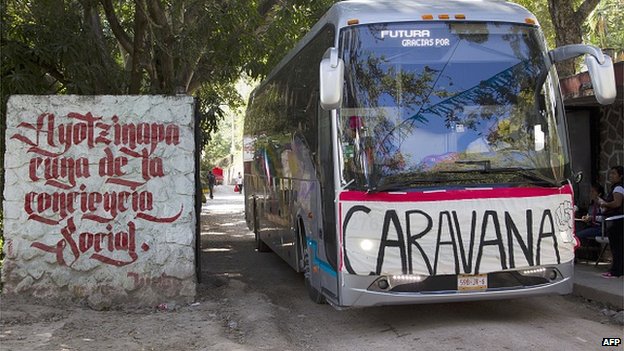 The protest bus tour embarked from Ayotzinapa on Thursday

They clashed with police and were last seen being bundled into police vans.

On Saturday Mexico’s Attorney General Jesus Murillo Karam said that suspected gangsters had confessed to killing the missing students and burning their bodies in a waste disposal site.

But the charred remains found in the site could not be identified and were sent on Wednesday to a laboratory in Innsbruck, Austria, for testing.

Results are not expected for several weeks.

Mr Karam added the criminals had claimed the trainee teachers were handed to them by police.

The attorney general’s statement led to a wave of protest, with demonstrators torching the state legislature in Guerrero on Wednesday night.

Demonstrators want the students to be found and are calling for a full investigation into links between criminal gangs and local politicians.