Egyptian police have used tear gas to disperse protesters angry that charges against ex-President Hosni Mubarak over killings during the uprising three years ago have been dropped.

About 2,000 people massed in Cairo’s Tahrir Square, the birthplace of the 2011 revolution. At least one person was reported killed in the clashes.

Mubarak was originally sentenced to life in jail then cleared in a retrial.

In a TV interview after the ruling, Mubarak said he did “nothing wrong”.

The former president, 86, is serving a separate three-year sentence for embezzlement of public funds.

He is currently being held in a military hospital, and is expected to serve at least a few more months of this sentence.

Mubarak, his former Interior Minister Habib al-Adly and six others had been convicted of conspiracy to kill and were sentenced to life in prison in June 2012, but a retrial was ordered last year on a technicality.

In all, some 800 people are thought to have been killed as security forces battled protesters in the weeks before Mubarak resigned on 11 February 2011. 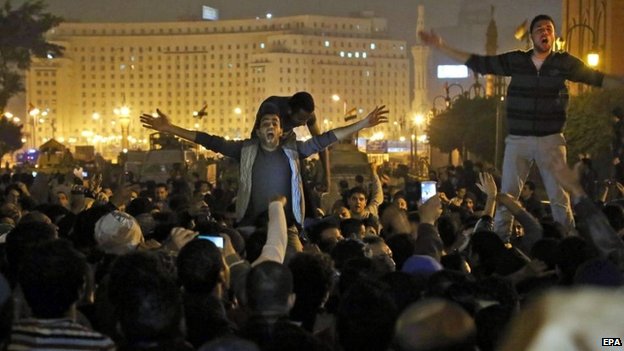 ‘No justice’Within hours of the court’s decision, demonstrators arrived on Tahrir Square.Liberal opponents of Mubarak were joined by supporters of the banned Muslim Brotherhood.

Shortly after the arrival of the Islamists, police used water cannon and tear gas, driving the protesters into side streets.

Relatives of those killed in 2011 reacted with anger to the court’s handling of the case.

“There is no justice for the poor,” said Ramadan Ahmed, who lost his son Mohammed in Alexandria during the unrest. “This is Mubarak’s law.”

But Mubarak supporters outside the court cheered the decision.

Mubarak’s lawyer, Farid al-Deeb, told AFP news agency it was a “good ruling that proved the integrity of Mubarak’s era”.

The former president gave an interview by phone to private Sada al-Balad TV after he was cleared.

“I did nothing wrong at all,” he said, adding that he had been “relying on God” while he awaited the decision.

Mubarak’s elected successor, President Mohammed Morsi, lasted only a year in power before being ousted by the military in July 2013 during mass anti-government protests.

Army chief Abdul Fattah al-Sisi was subsequently elected in his place and under his rule, TV stations and newspapers have largely dropped criticism of the Mubarak era, correspondents say.