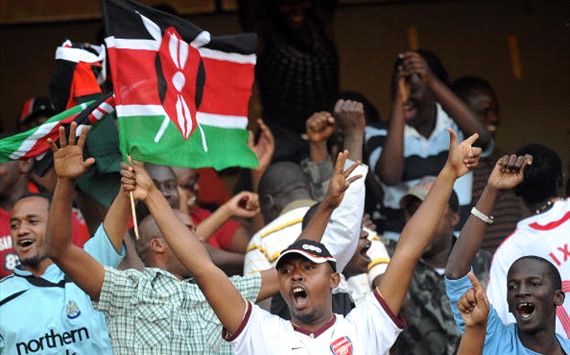 Kenya re-ignited their hopes of ending an 11 year drought without winning Cecafa Senior Challenge trophy after they beat South Sudan 3-1 in a closely fought match played at Nyayo Stadium on Saturday.

Ethiopia lead the Group after their afternoon 3-1 win over Zanzibar. It was evident that Stars had missed the tactician in the first game as they showed a different level of confidence and playing style.

Jacob Kelli, the 2013 Golden boot winner started upfront in partnership with Allan Wanga while Noah Wafula took David Gateri’s place on the wing. It was these changes that would engineer a different Harambee Stars as they highly increased the speed of attack.

Kenya got into the lead just after 15 minutes when Azam FC defender Jockins Atudo converted from the spot kick. South Sudan’s Fabiano Lako had handled the ball inside the box after Aboud Omar had attempted to cut back a cross.

Allan Wanga would have doubled Kenya’s lead minutes later but he wasted a glorious chance. Francis Kahata had sliced in a decent pass with Wanga beating the offside trap, but he delayed with the ball attempting to dribble past the keeper, who managed to tap the ball away from his feet.

South Sudan got a precious equalizer in the 26th minute, captain Richard Jistin curling in a free-kick that evaded the Kenyan wall and past keeper Duncan Ochieng.

But South Sudan’s celebrations would last only three minutes, Jacob Kelli getting Kenya back into the lead with a superb diving header from Noah Wafula’s cross. Kelli almost grabbed his brace with a minute to half time but his rasping header from Allan Wanga’s cross came off the crossbar with Francis Kahata failing to guide the rebound home.

Stars kept the pressure going into the second period, Allan Wanga again failing to guide home a decent chance on 50 minutes. The Ingwe striker would have done better, again one on one situation with the South Sudanese custodian but he took too much time on the ball.

Stars had a chance to increase the lead in the 68th minute but Atudo missed from the spot after Kelli had been hacked down in the box by the South Sudanese goalie from Teddy Akumu’s clever pass.

But Kenya stamped their authority in the game with 15 minutes to play, David Owino scoring his second national team goal from a tight angle after overlapping and meeting Aboud Omar’s pass. Stars now have four points and are second to Ethiopia in Group ‘A’ with a smaller goal difference.

JKL Lady Dolphins unbeaten in first round of Basketball League